skip to main | skip to sidebar

Send In The Clowns 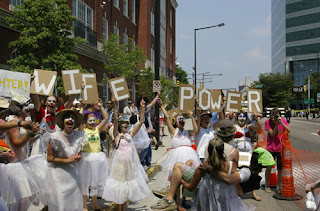 This is an example of something very positive, that can credited to the Caucasian/Americans in this picture. This is a republished article from www.neatorama.com

Unfortunately for [VNN](also known as the KKK), the 100th ARA (Anti Racist Action) clown block came and handed them their asses by making them appear like the asses they were.

Alex Linder the founder of VNN and the lead organizer of the rally kicked off events by rushing the clowns in a fit of rage, and was promptly arrested by 4 Knoxville police officers who dropped him to the ground when he resisted and dragged him off past the red shiny shoes of the clowns. http://www.volunteertv.com/home/headlines/7704982.html

“White Power!” the Nazi’s angrily shouted once more, “White flowers?” the clowns cheers and threw white flowers in the air and danced about merrily.

“White Power!” the Nazi’s tried once again in a doomed and somewhat funny attempt to clarify their message, “ohhhhhh!” the clowns yelled “Tight Shower!” and held a solar shower in the air and all tried to crowd under to get clean as per the Klan’s directions.

At this point several of the Nazi’s and Klan members began clutching their hearts as if they were about to have a heart attack. Their beady eyes bulged, and the veins in their tiny narrow foreheads beat in rage. One last time they screamed “White Power!”

Links to related sites and articles